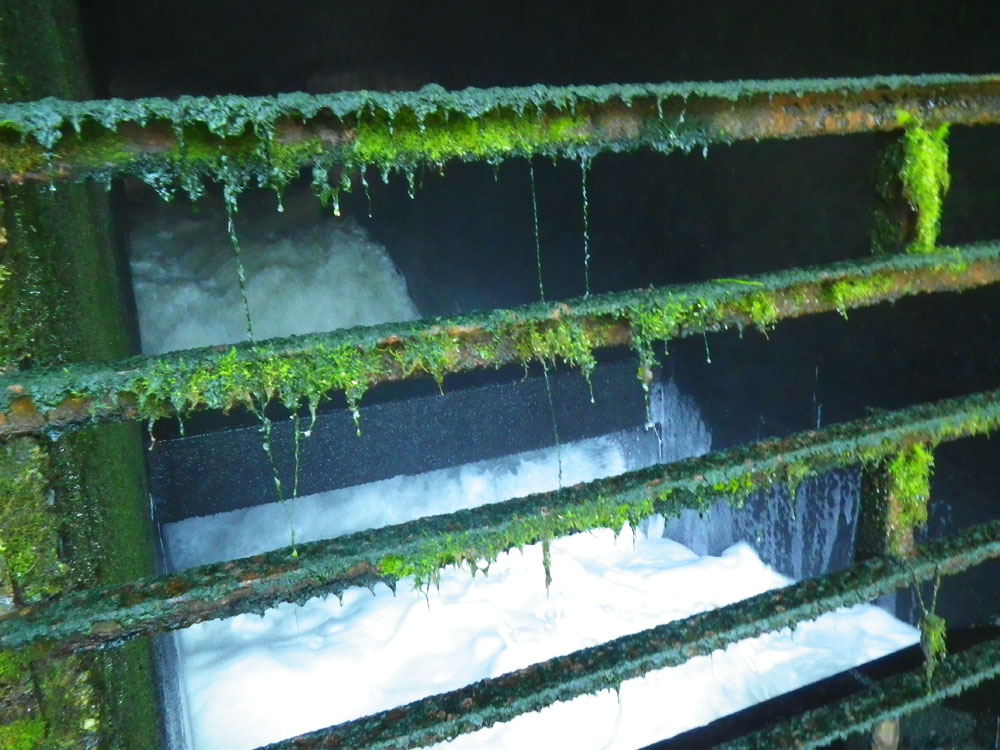 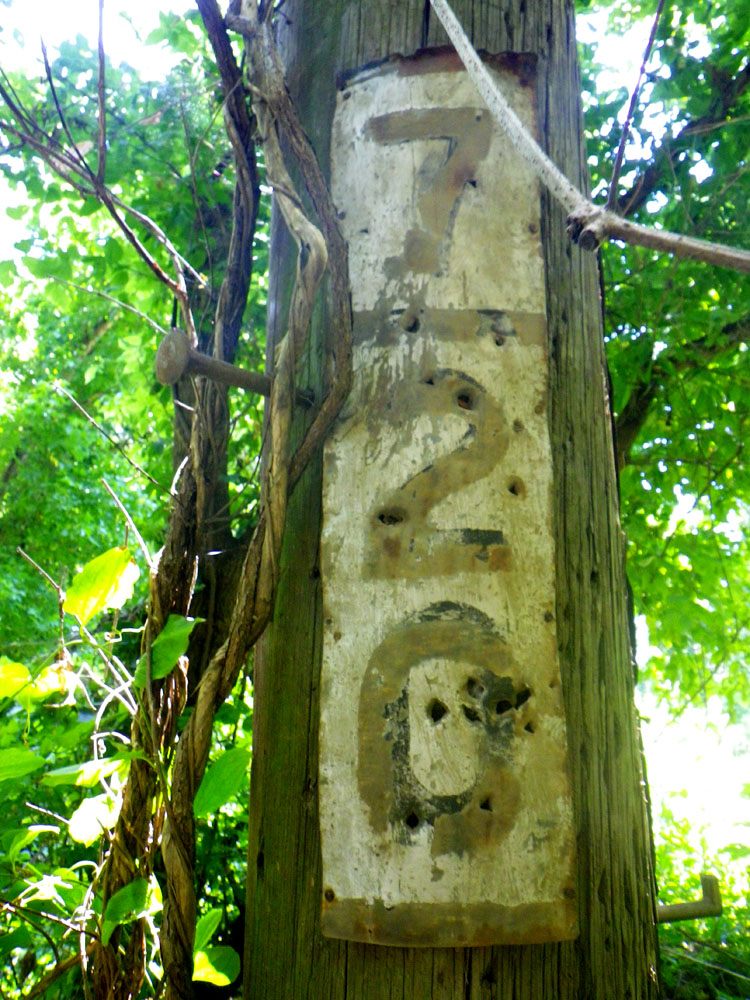 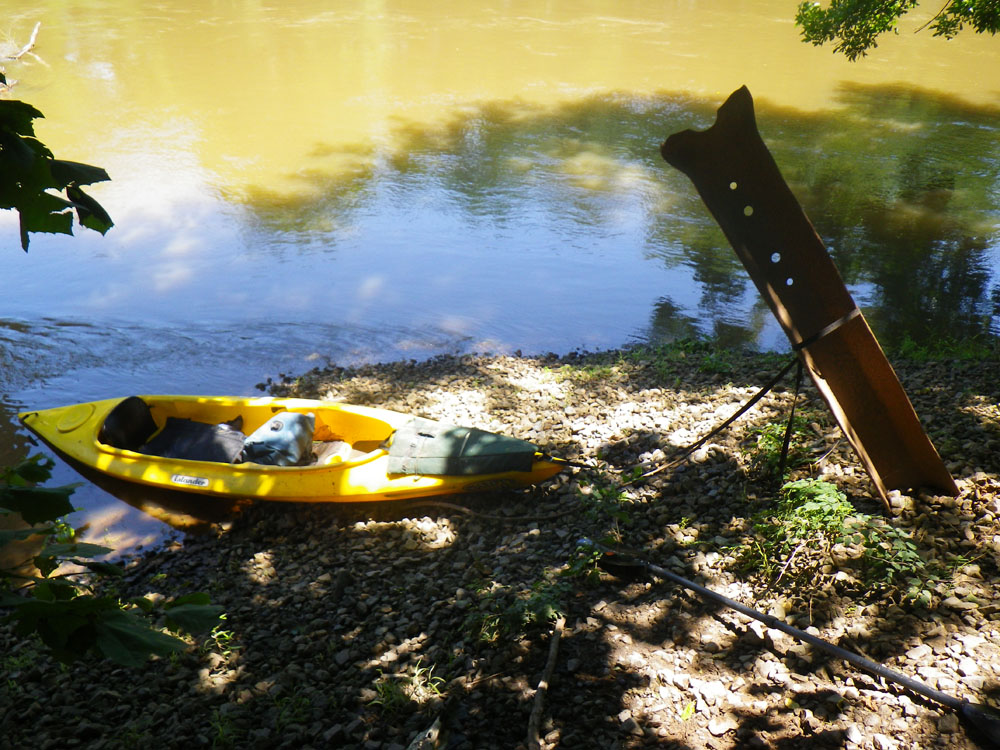 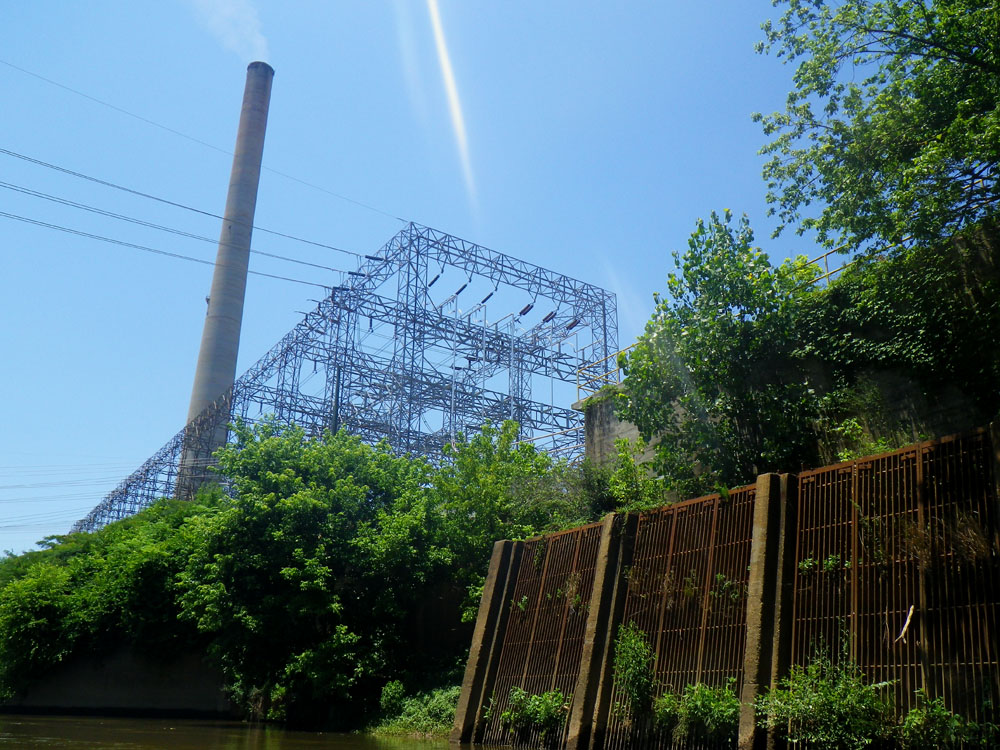 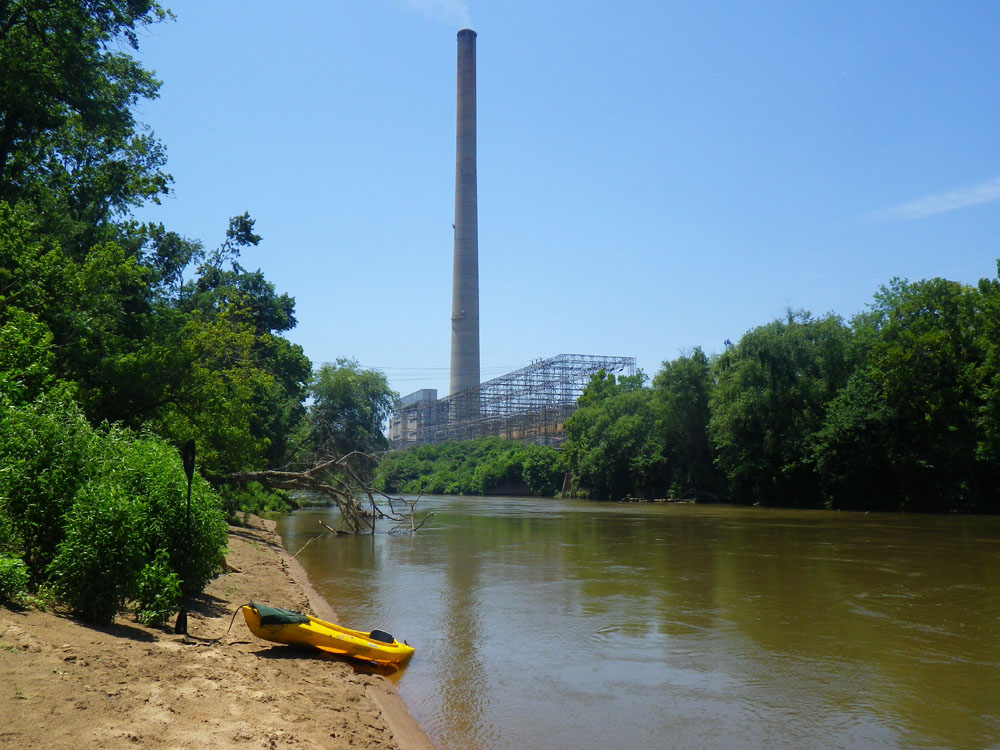 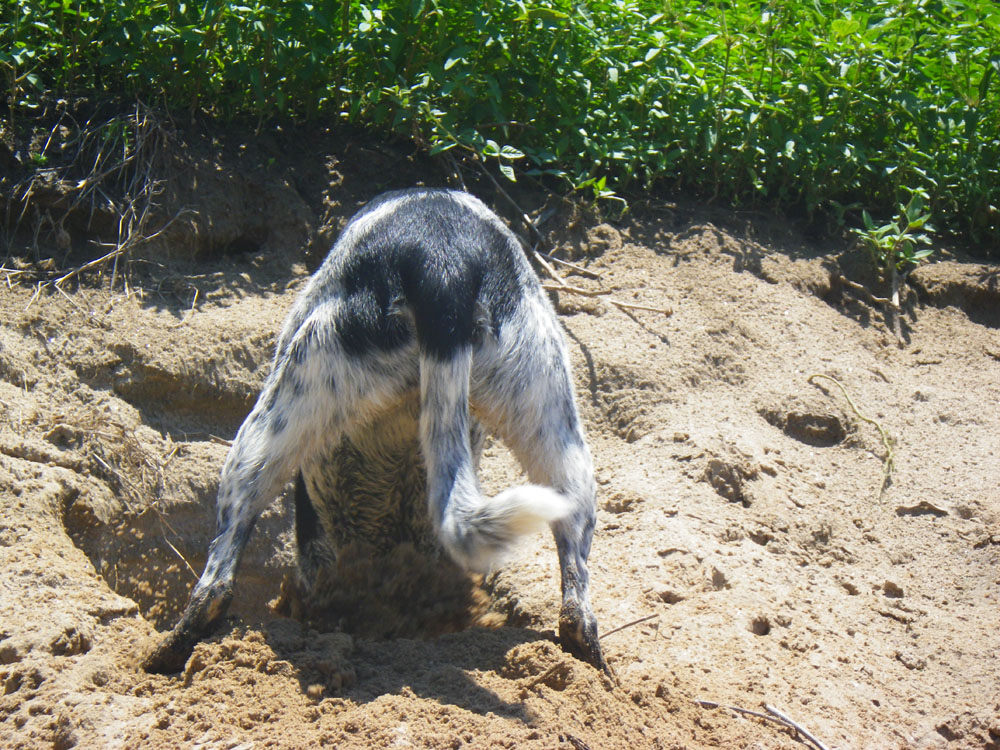 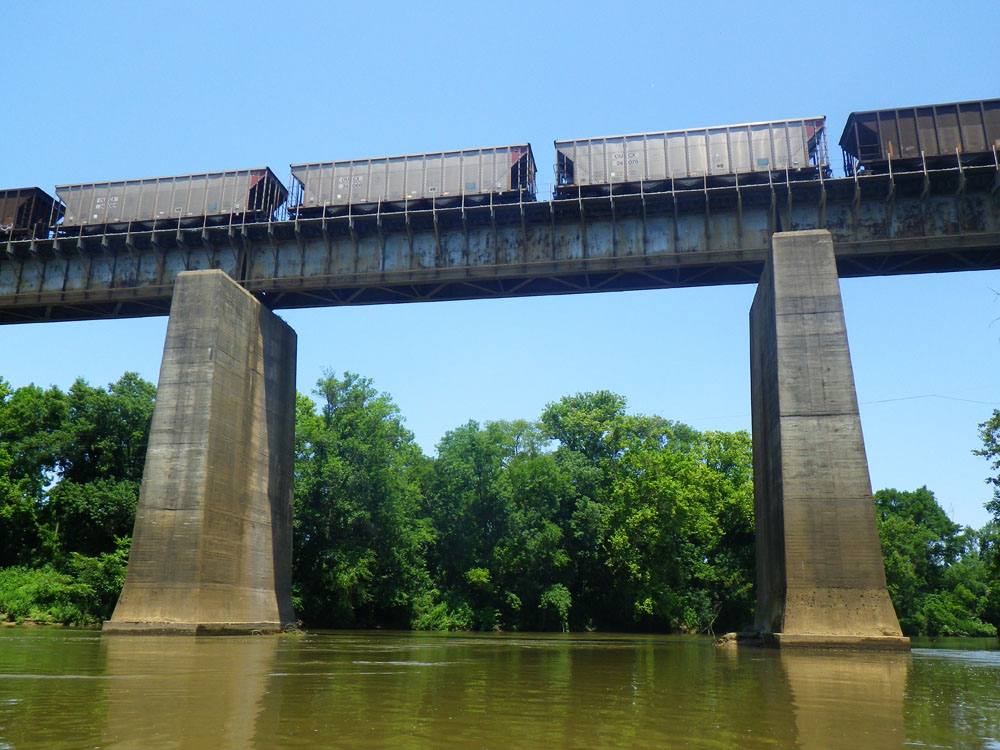 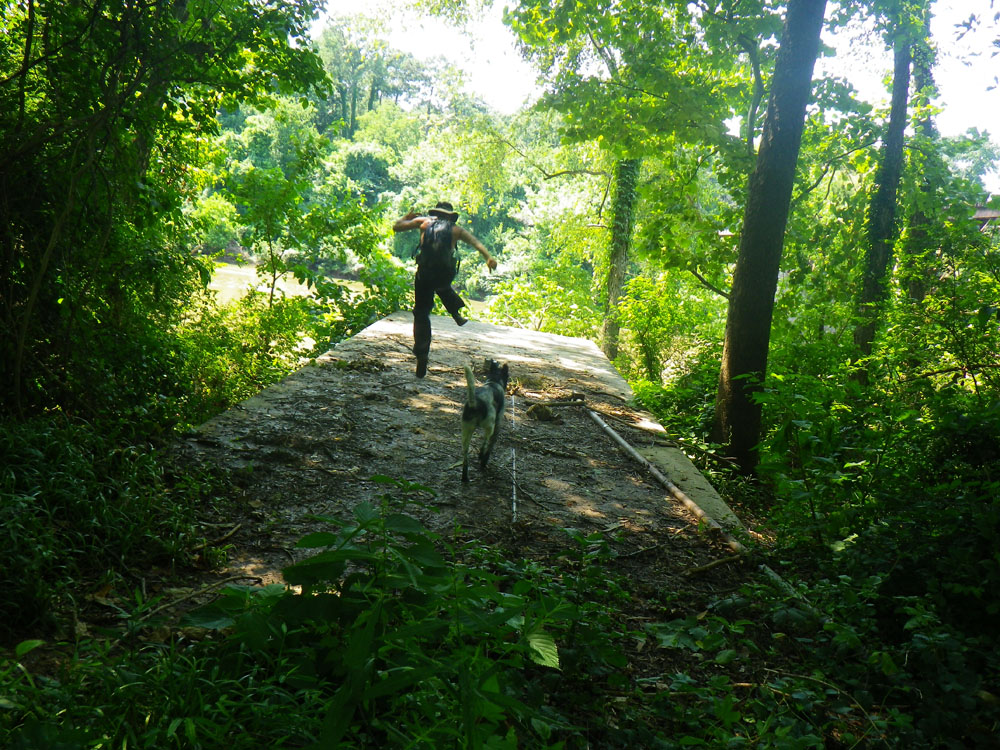 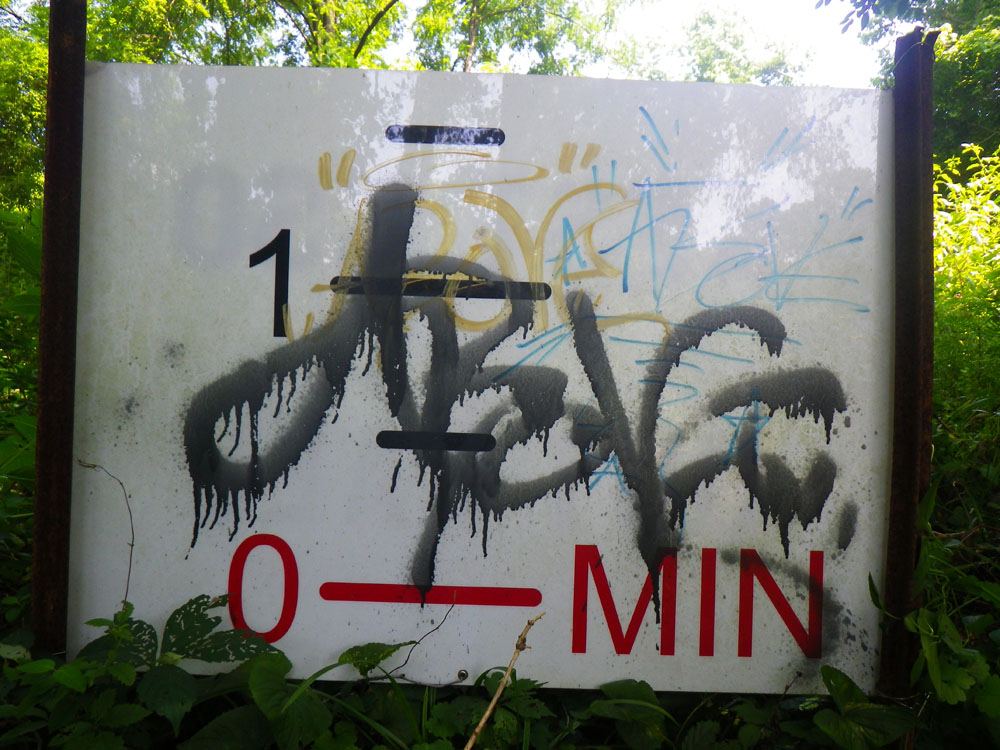 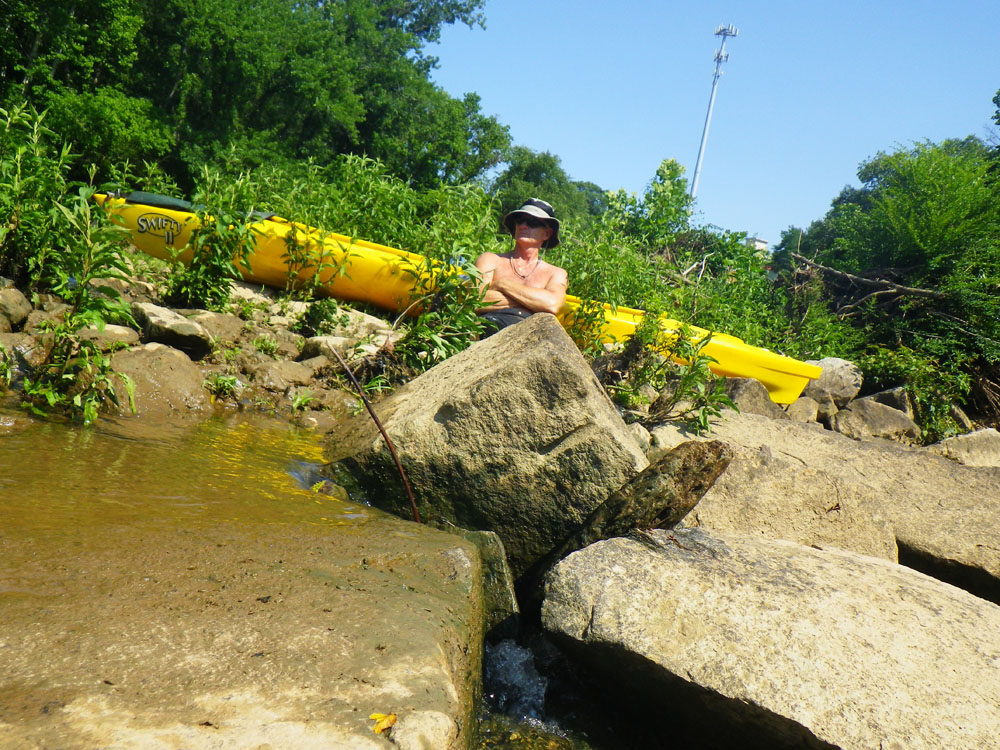 I didn’t do much paddling on the drift down to conserve energy and tested a few drops to see if I could manage the reverse.  There were a couple of fast, tight turns that would be waiting for me at the end of day.

After 4 miles I entered the industrial zone judging by the foul odor.  A power plant was dumping treated waste water right into the Chattahoochee.  It smelled like dirty wet laundry as it foamed on the surface.  The racket of factories, trucks, trains, whistles and pumping stations filled the air.  Workers in trucks driving to and fro along the river’s edge slowed down to have a look at the crazy dude with his dog on a kayak milling about below them.  The highlight of the industrial zone is a towering smoke stack that must be 10 times higher than the tallest tree on the river.  You won’t see your typical day-tripping rafter floating this part of the Chattahoochee.

I noticed an iron pole sticking out of the bank under an abandoned railroad bridge so I tied up the kayak, put on long pants  and hoofed off through a thicket of poison ivy, kudzu and briars to have a look at an abandoned building with a collapsed roof that was once connected to the train bridge above me.  Oddly enough, behind the ruin is a paved walking trail like the one you see going through urban neighborhoods – the kind of trial designed to make you feel safe but also to make you afraid that a monster will come out of the woods and grab you if you were to set one foot off it.  There was even a warning sign that read Watch out for trees along trail. I guess the trees will grab you too if you’re not careful.  What made this extremely cool was the walking trail was closed; fenced off from the civilized world and slowly consuming in kudzu.  Nature is the law.  I hung out awhile and had lunch before heading back to the kayak to start the reverse paddle out.

Going against the current was a real chore. I was not looking forward to the big shoals and white water waiting ahead.  When I reached them I felt something had changed.  There were exposed boulders, additional shoals and mud banks than weren’t noticeable on the trip down. Then it hit me – the dam way up stream was holding back the water and the river level had dropped some three to four feet.

I stuck close to the bank and paddled slowly forward, careful to stay behind the dead fall that cut the flow. When given the choice to paddle out into the river to get around dead fall or climb over or under it, I chose the latter.  You can’t beat the river. The trick to survive is not to rush.  Just be patient.  Finally I got over the last white water and had a nice steady reverse for only a couple of more miles to the landing but the current was not letting up and I was feeling pretty spent.

I passed a river front party.  People were all dressed up for the occasion and here I was paddling by in my ugly yellow muddy kayak, sweaty and tired, with a dirty dog sitting on the front.  If they had any idea what I’d just been through they probably wouldn’t have cared except for a boy dressed in a shirt and tie standing by the edge of the water.  I could tell by his stare that he would much rather be out here in the Chattahoochee River than at a grown ups fancy party.