07:15:11, Georgia: 32° 4.127’N, 84° 54.840’W – Providence Canyon, which is sometimes called Georgia’s “Little Grand Canyon”,  is considered to be one of the seven natural wonders of Georgia.  Providence Canyon actually is not a purely natural feature — these massive gullies, some as deep as 15o feet, were caused by erosion due to poor farming practices in the 1800’s.

I setup camp at Florence Marina, south of Omaha, Georgia and headed to Providence Canyon State Park 8 miles up the road.  The Park showcases several spectacular canyons but I had my sights on a group of unattended canyons outside the park boundary.

I took advantage of the safe parking inside the Park, put on my hiking garb, grabbed my pack, and crossed the road into the adjacent woods.  I was about to hike through a thick patch of dense south Georgia wilderness to reach the hidden canyons.

In the woods it was hot and incredibly humid.  I was looking for an erosion trail to follow into one of the canyons.  After an hour of bushwhacking I found one in a deep gully.  Weaving like a snake, I followed the erosion trail, but soon felt faint from the intense heat and had to abandon the gully for high ground.  I was running out of drinking water and the journey had only just begun.

I climbed out of the gully onto a hilltop and a slight breeze brought new life to my quest.  I walked along a ridge then spotted a canyon through the trees.  I leaned over the edge and looked straight down for a good 100 feet.  The canyon looked like it was cut with a gigantic knife; totally unnatural but awesome to behold.  The walls were made up of red clay for the first 20 feet and then soft white sand underneath to the canyon floor.  This sand was once an ancient seabed over 210 million years ago.  To walk down into the canyon was to walk back into prehistoric time.

I trailed the rim of the canyon.  There was no easy way down.  At the top end  I spotted a tree root dangling over the canyon wall just above a clay boulder resting on top of a reasonably gentle slope.  That would have to do.  I lowered myself and my dog, Dawson, into the canyon.  I questioned whether we could climb back out.

Now I was walking the canyon floor around towering pillars of ancient sea sand.  This place is one hell-of a sand castle! A small stream meandered through the canyon floor carving a trail to follow.  There was no evidence of past human encounters; not even a single footprint.

I walked to the end of the canyon to the exact spot where I had to abandon earlier.  I turned and went back into the canyon where it was remarkably cool.  I sat down and had lunch, an apple, and watched clouds building to the east.  I heard thunder in the distance.  I wondered if I was going to get rained on.  I certainly wouldn’t mind.  Then it hit me; I’m deep in a canyon eroded by the rain.  The evidence of flash flooding is everywhere.  It was time to get out of here.

I was right about the rain.  It poured down before I could climb out so I hunched down in a tight pinch of canyon between two high cliffs and put on my rain suit.  The wind and lightning was kicking up something fierce but all I could do was just sit in the sand and wait it out.  I felt water getting into my rain pants.  Where I was sitting turned into a stream of mud and sand.  Water was gushing in from all directions and converted the canyon floor into a little raging rapid.  I climbed to higher ground and witnessed first hand how the canyon forms itself.

The storm finally passed but the rain kept coming down.  I wasted no time in climbing out.  I was soaked to the bone and covered in mud.  Hiking back through the woods was out of the question so I plotted a course that would take me through a farm field to the main road where I could walk safely back to the car; or so I thought.

When I reached the road another wave of storms hit worse than the last.  There wasn’t a car in sight.  I cut down a gravel road to look for shelter and walked up on an above ground tomb of a confederate soldier killed in the civil war in 1864.  It was a gloomy feeling to be here in the pouring down rain but I used the tomb as a partial shelter until the stormed slacked enough to move on.

After hiking a bit further down the road, yet another front moved in.  And I thought there was a drought down here! The whole thunder and lightning show started all over again.  There was no where to hide expect for a farm house up ahead.  At this point I had no pride left and planned to ask if I could come in out of the rain but as I neared the house it was clear that it was abandoned.  The windows and doors were sealed with plaster.  The fringes of the old homestead were in major disrepair.  It did have nice big walk-around porch and that would keep me dry.  I stayed there for easily an hour and the rain never stopped.  Considering that I was caught in a flash flood a few hours ago I was feeling pretty content now.  I sat on a dusty, dirty broken couch and surveyed the farmstead as if I owned the place.  There was a tree full of ripe pairs growing in the yard.  The rain slacked again and I snapped out of my dream-state,  got back on the road,  and finally made it back to the car just before dusk. 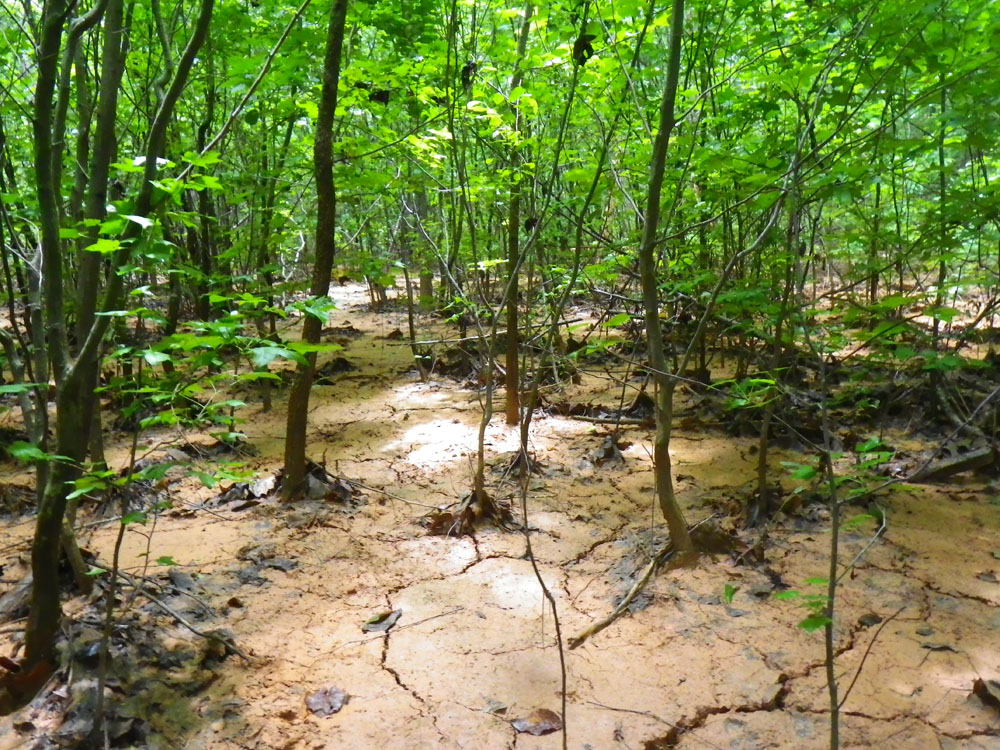 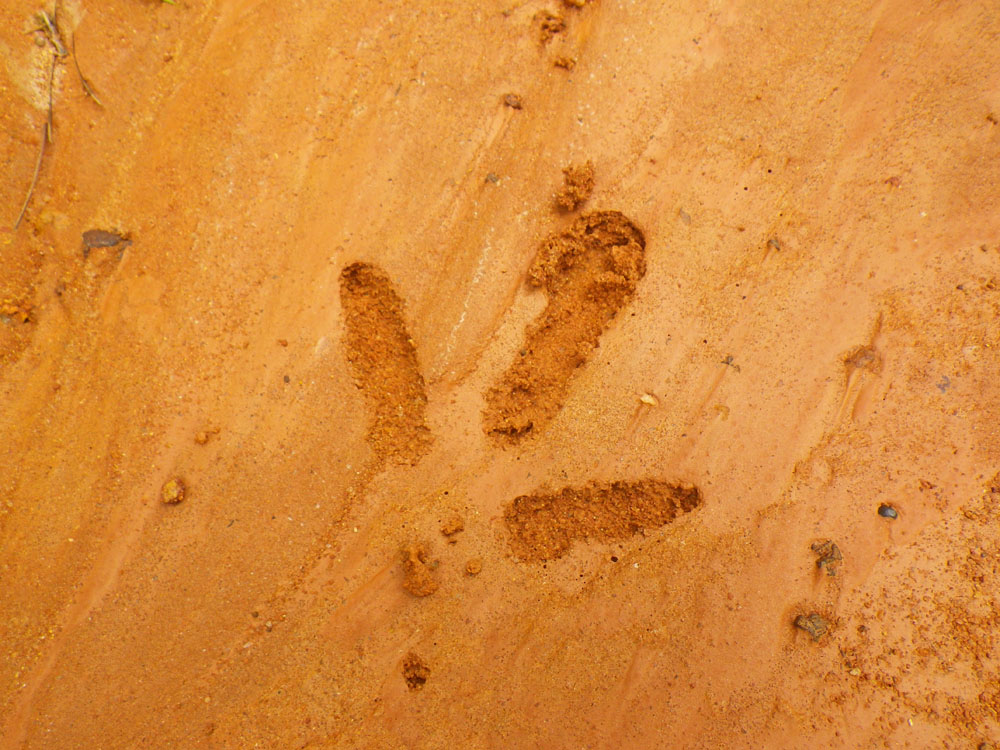 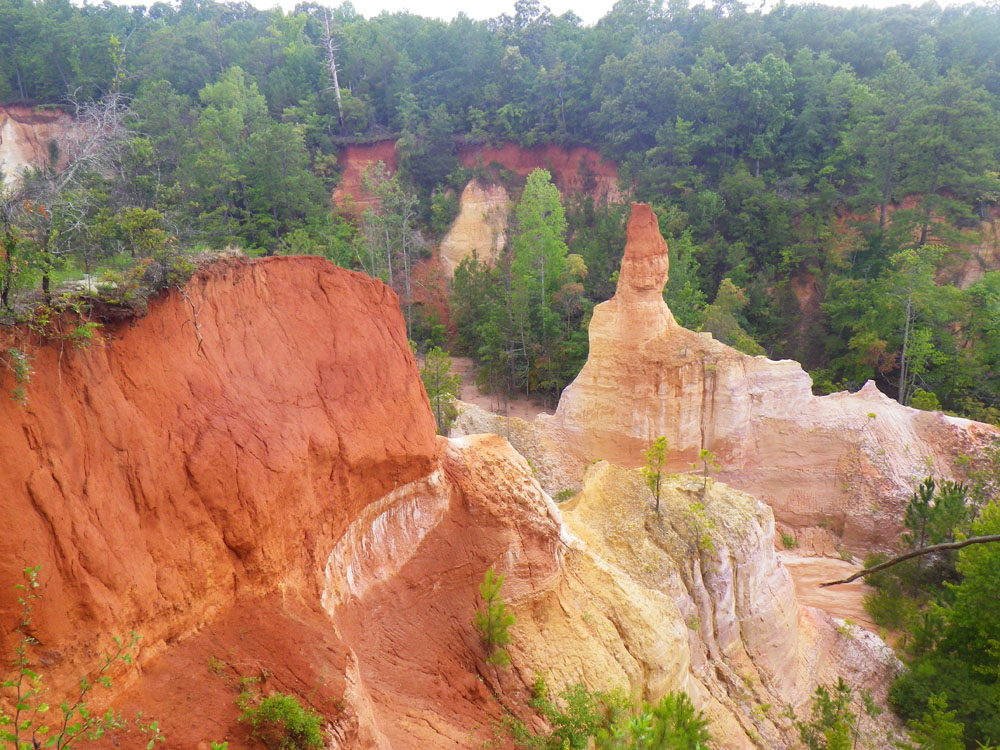 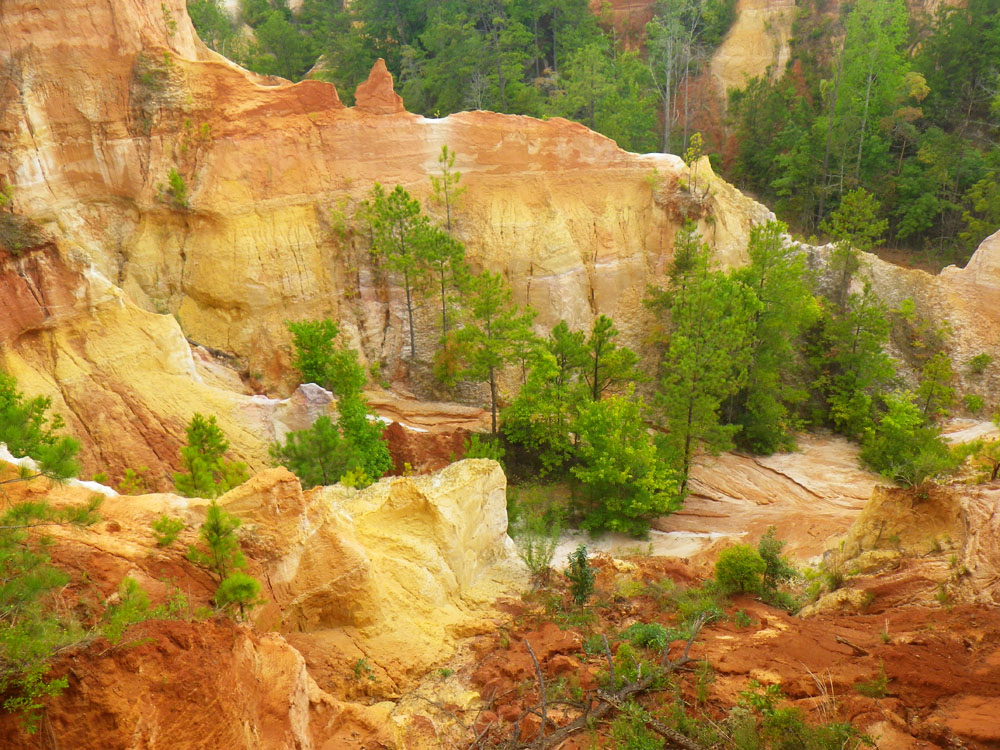 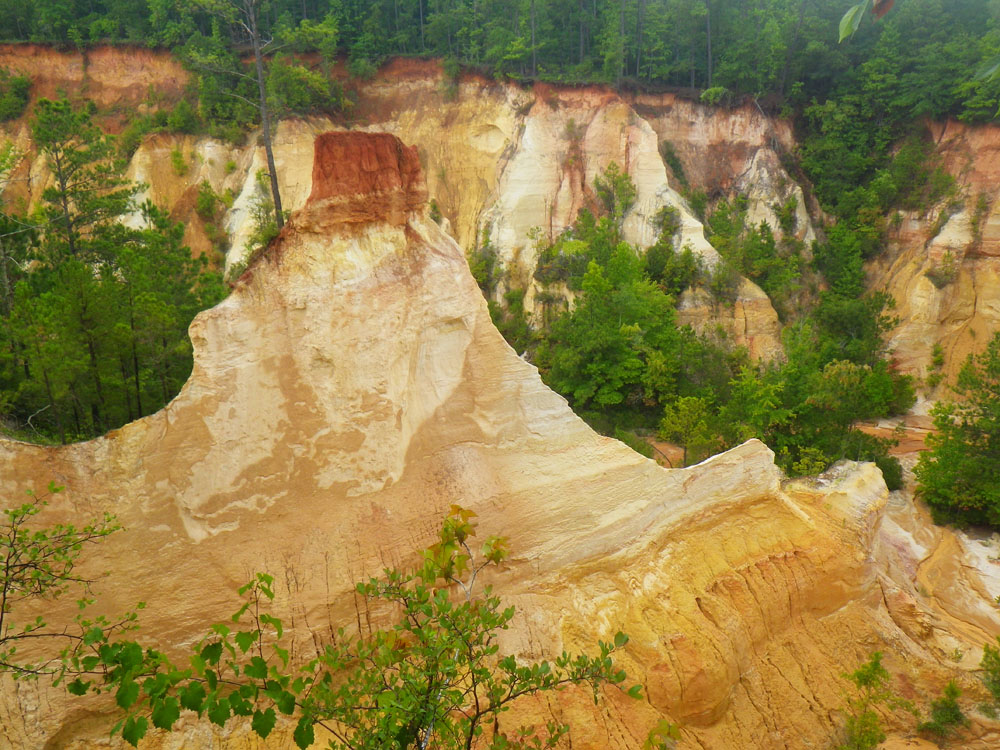 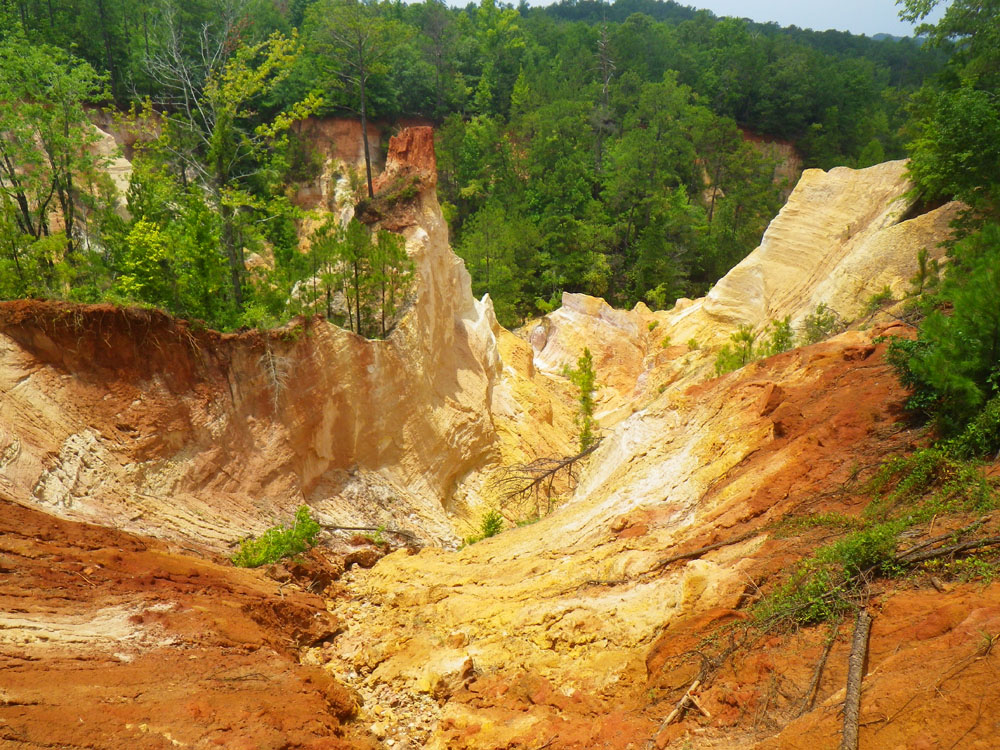 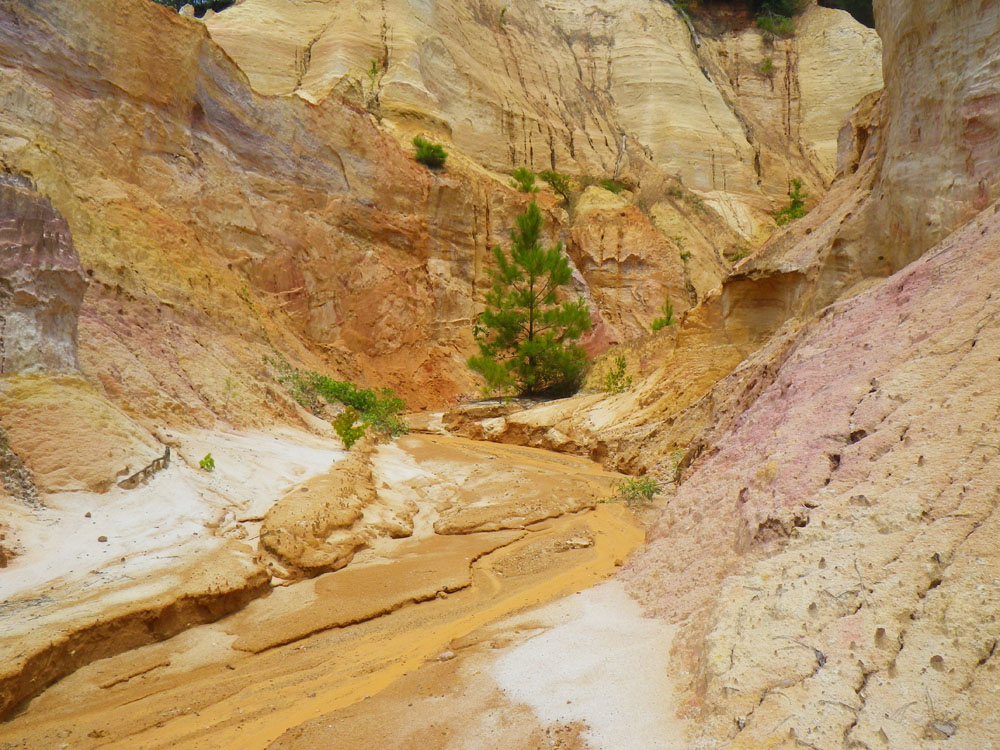 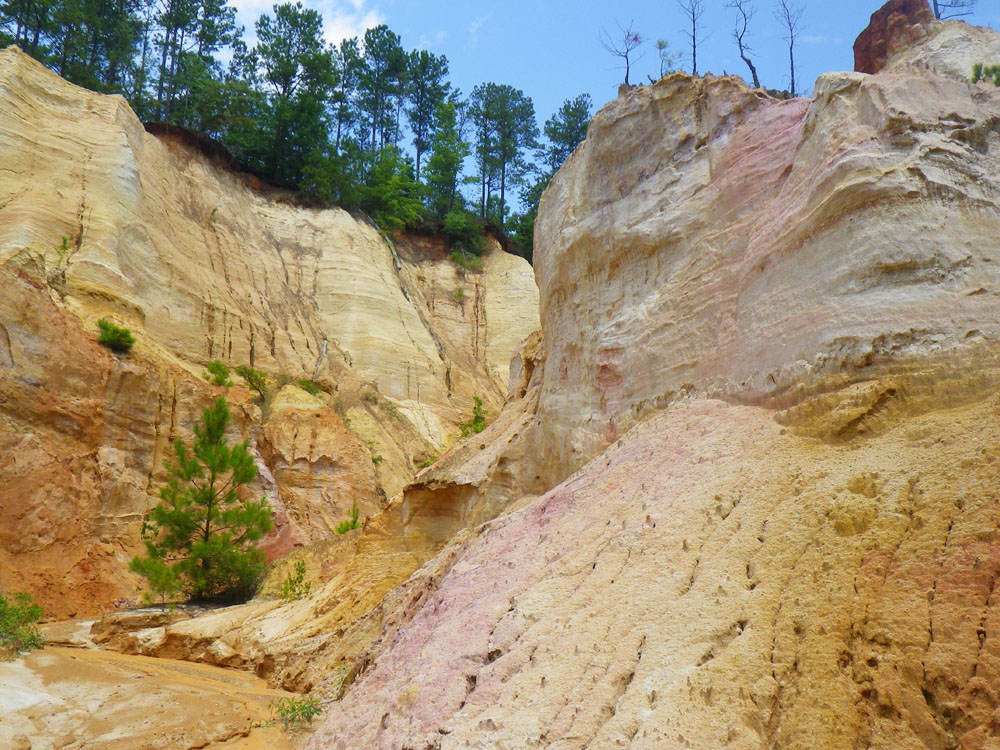 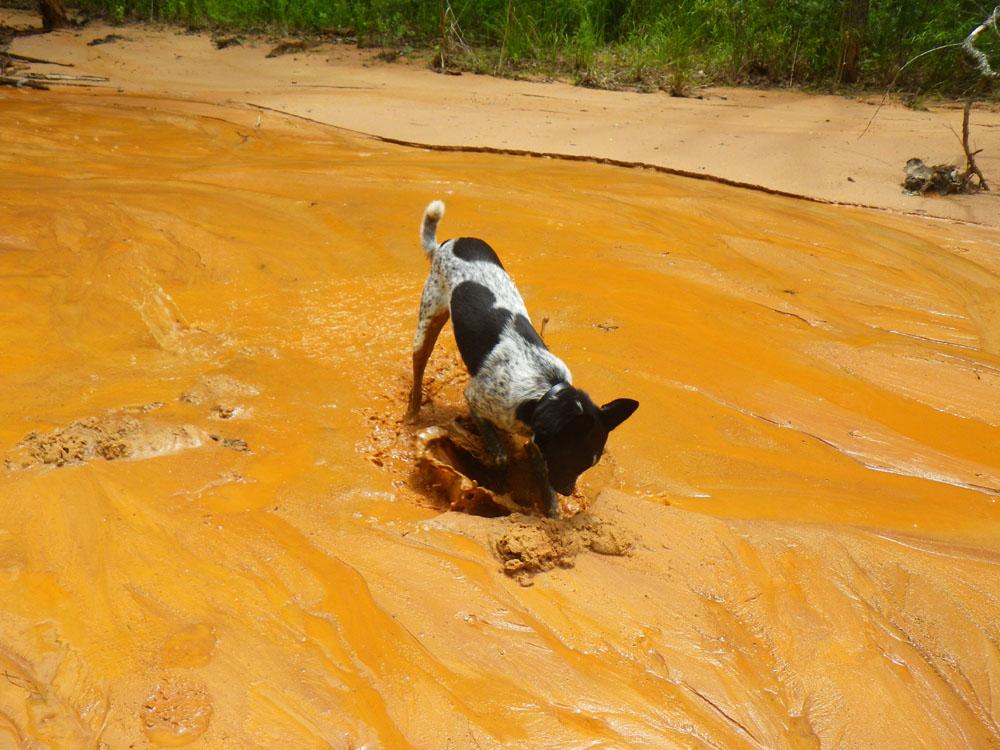 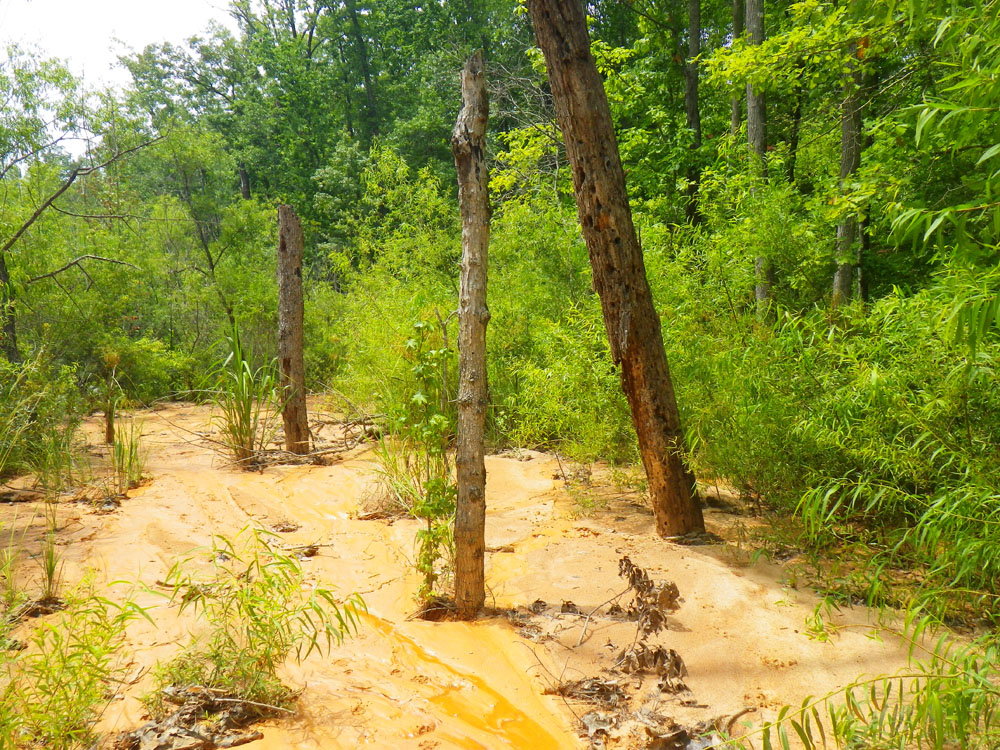 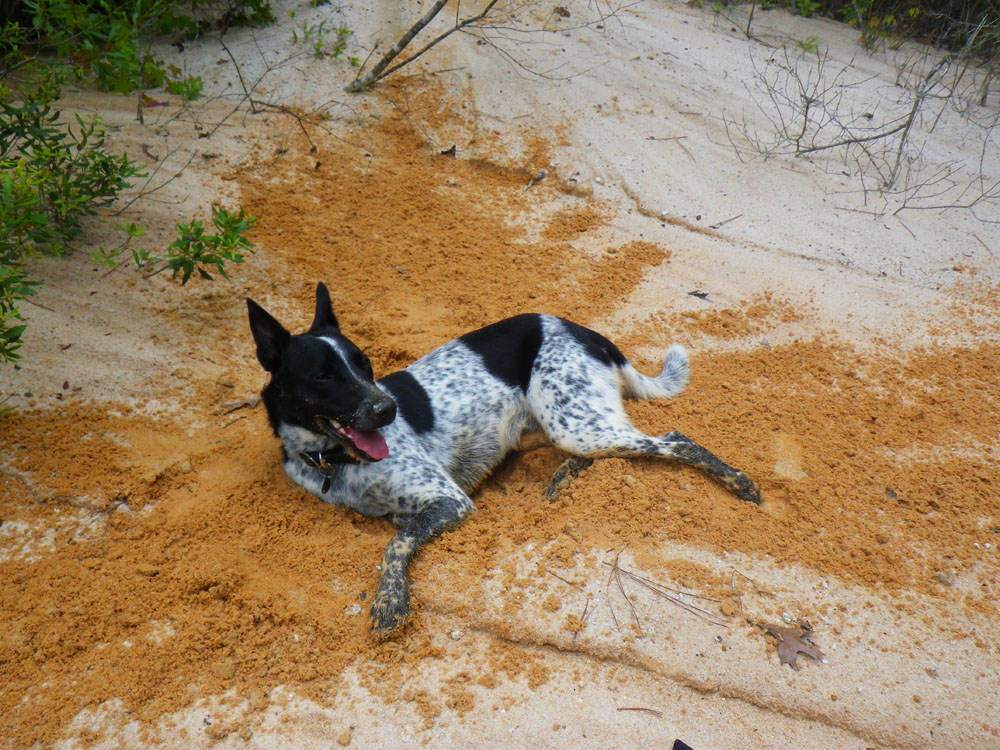 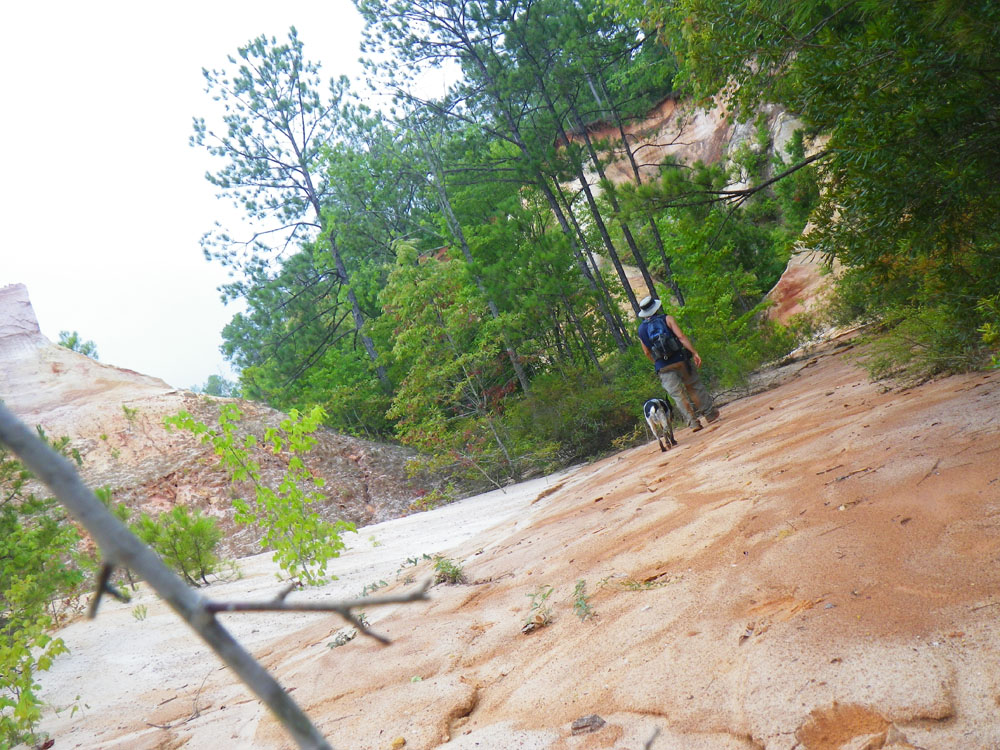 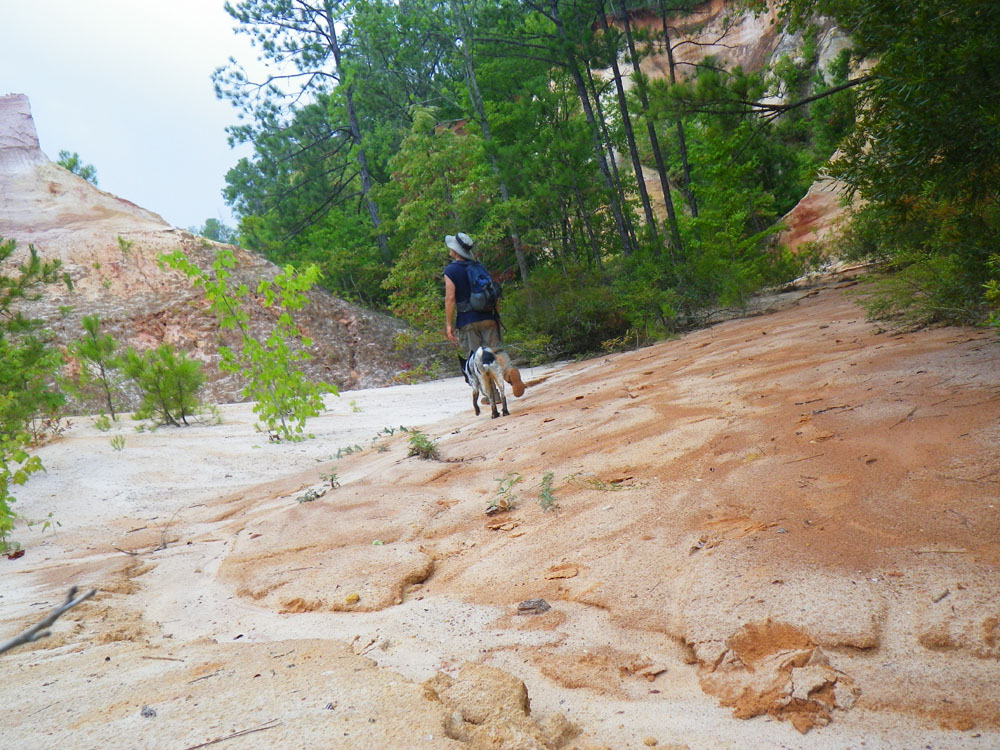 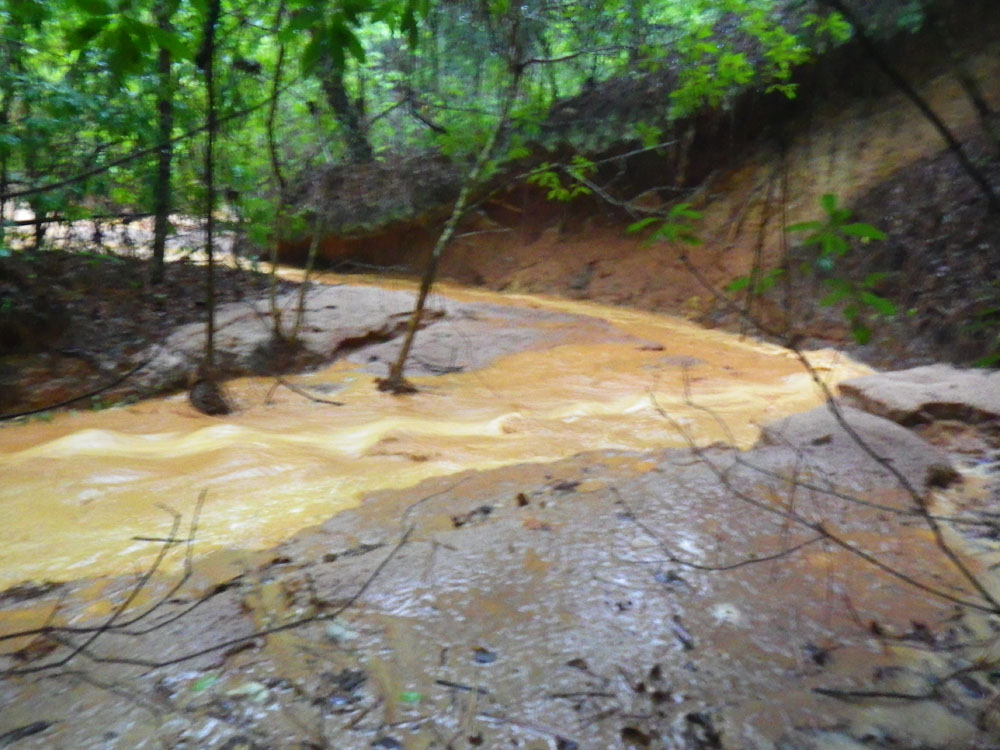 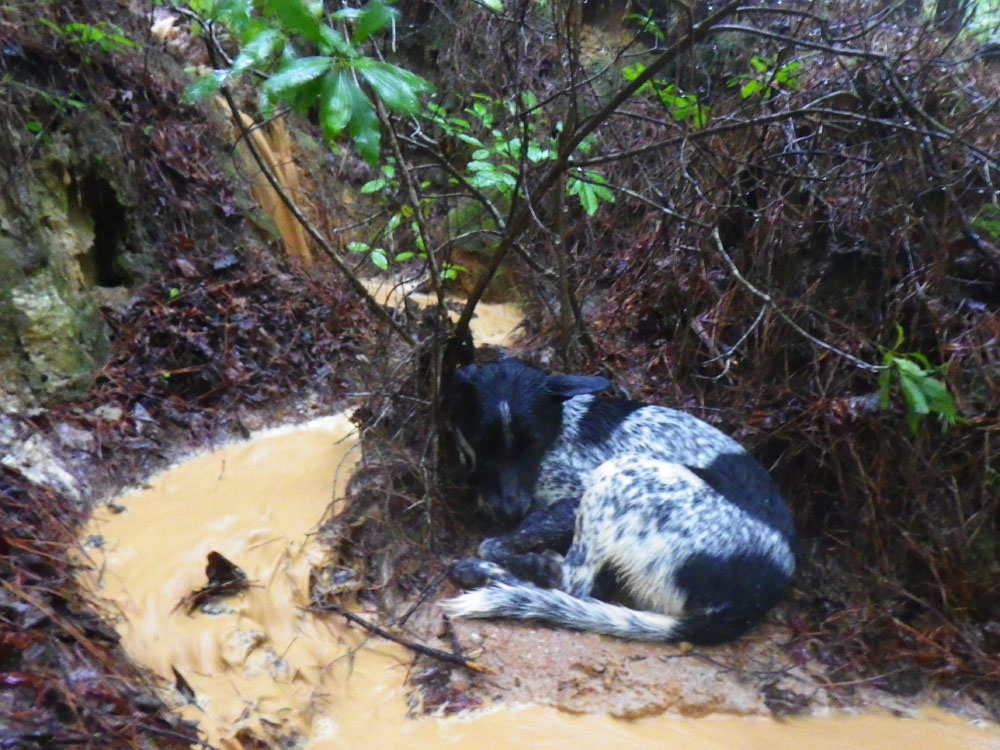 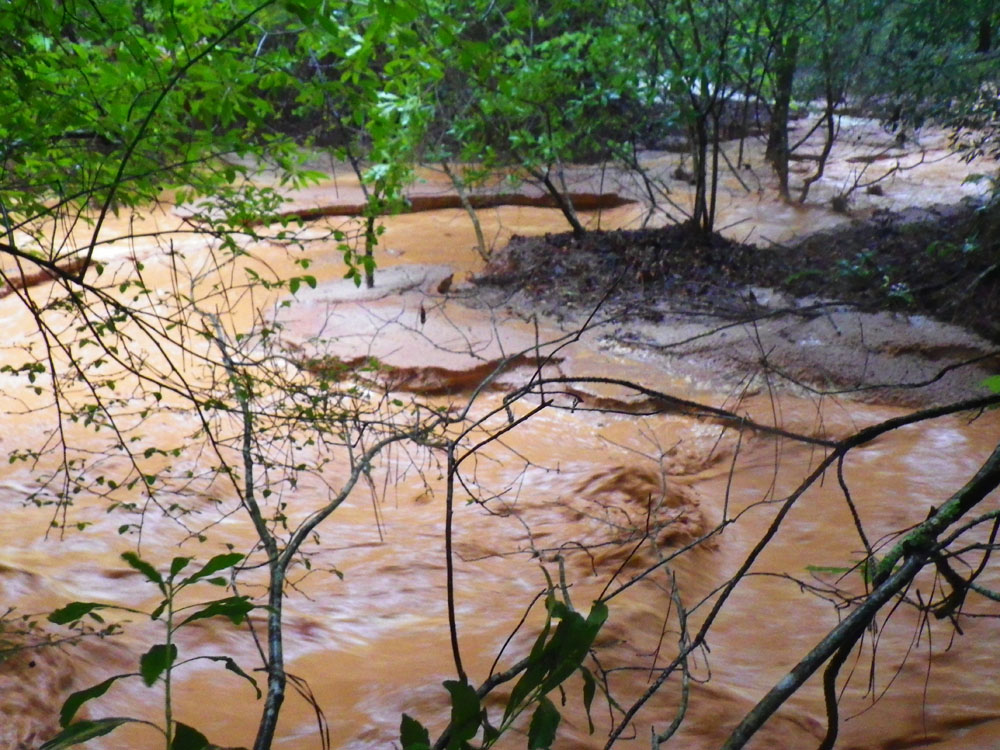 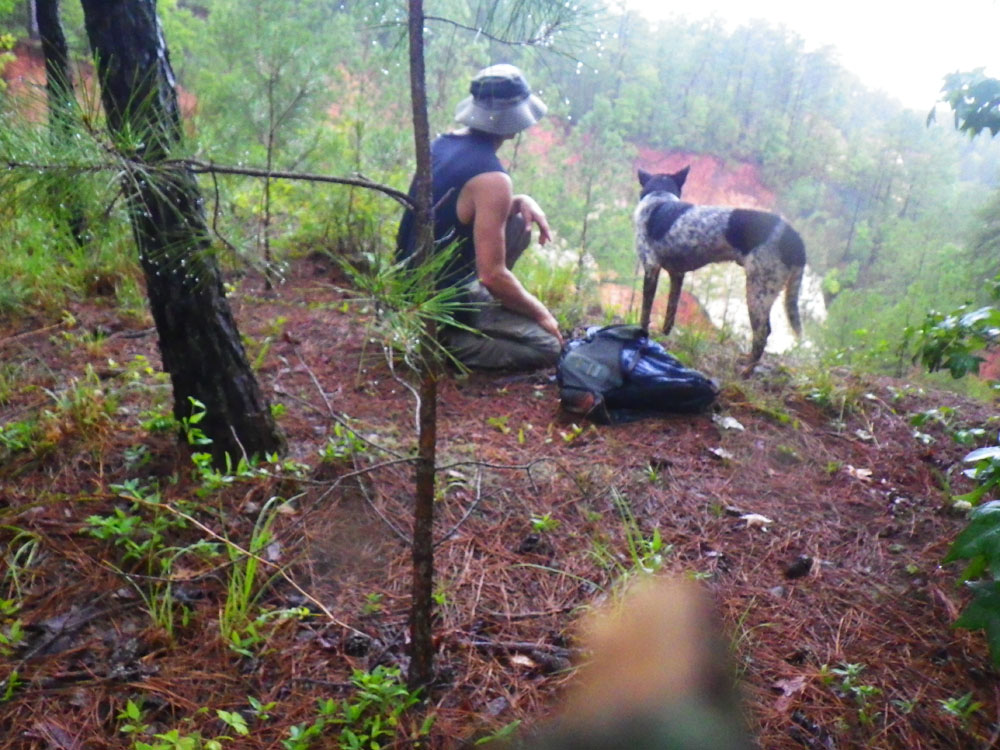 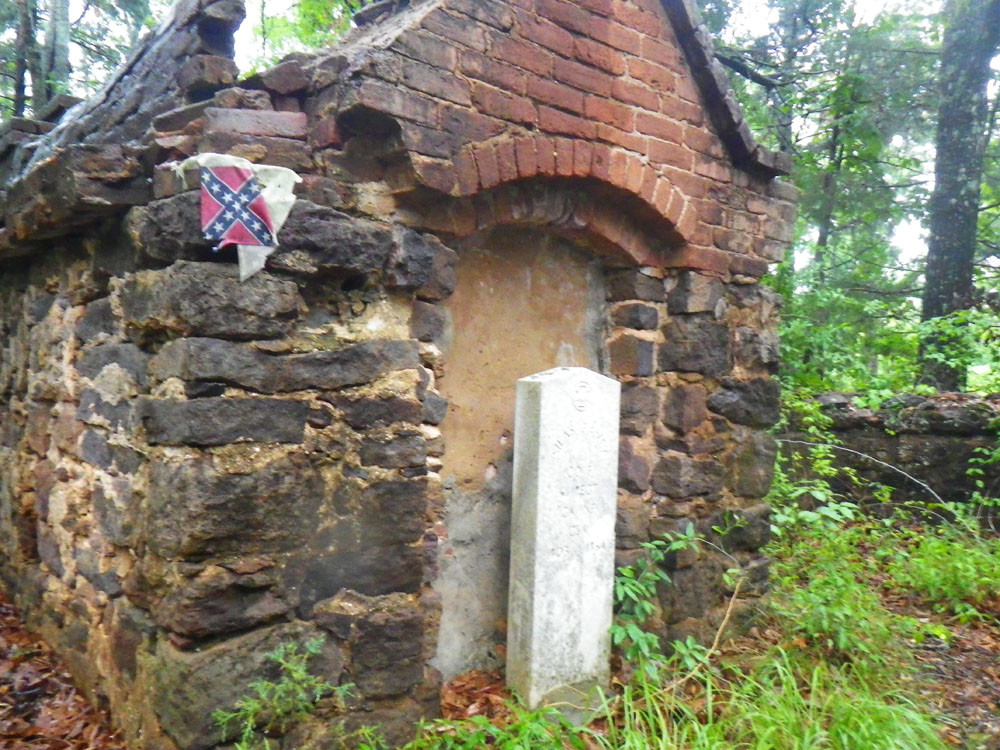 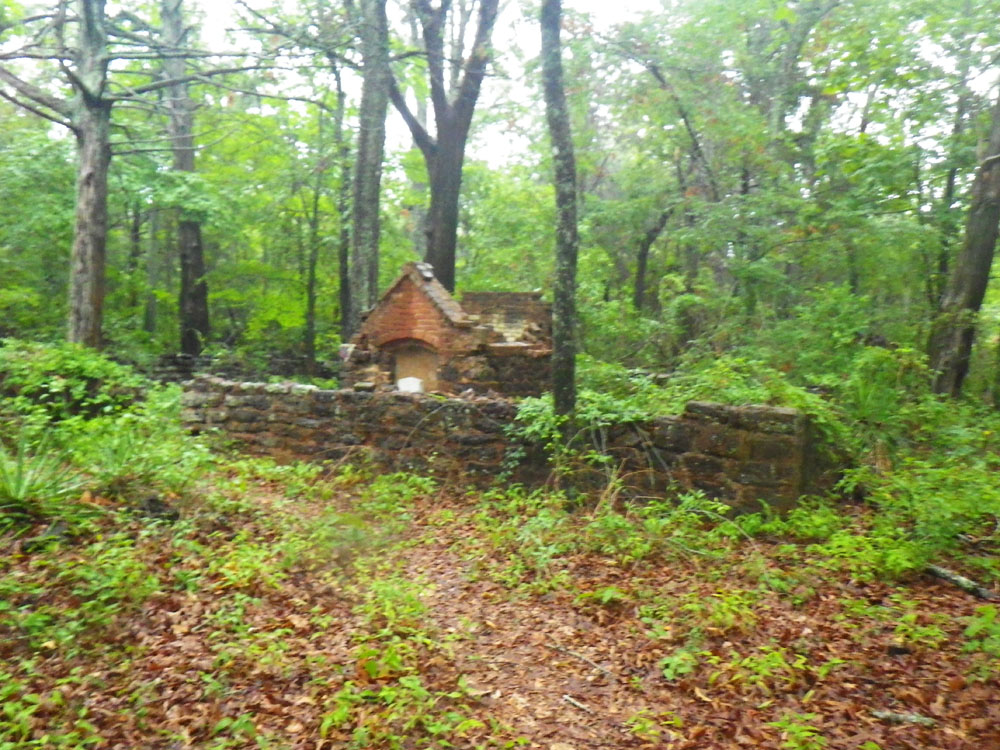 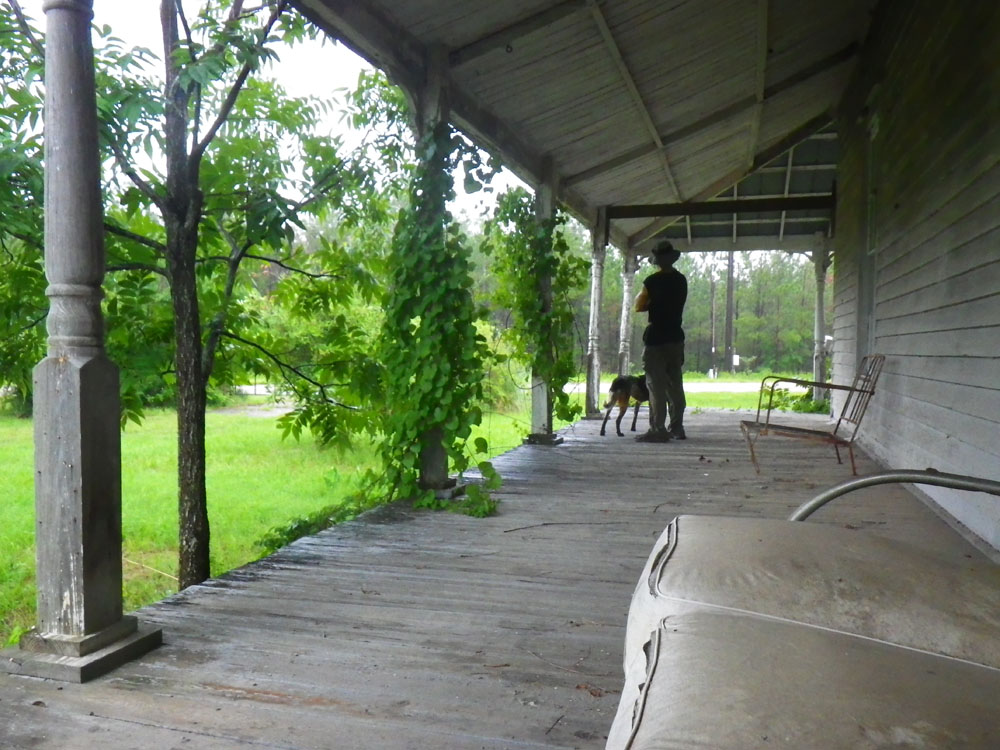 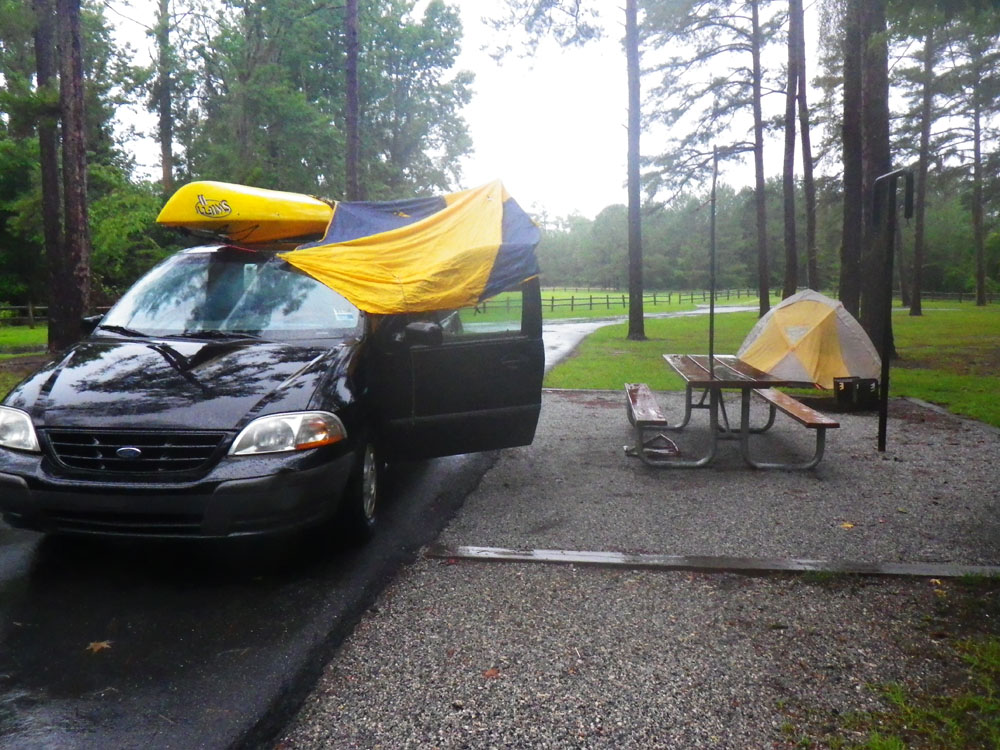 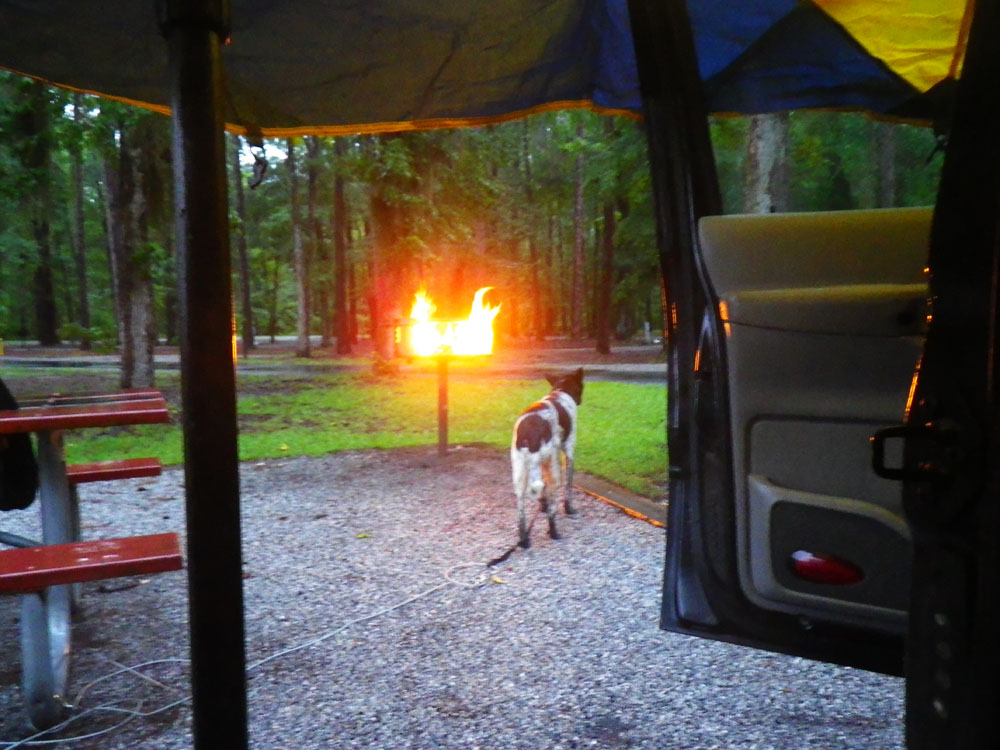 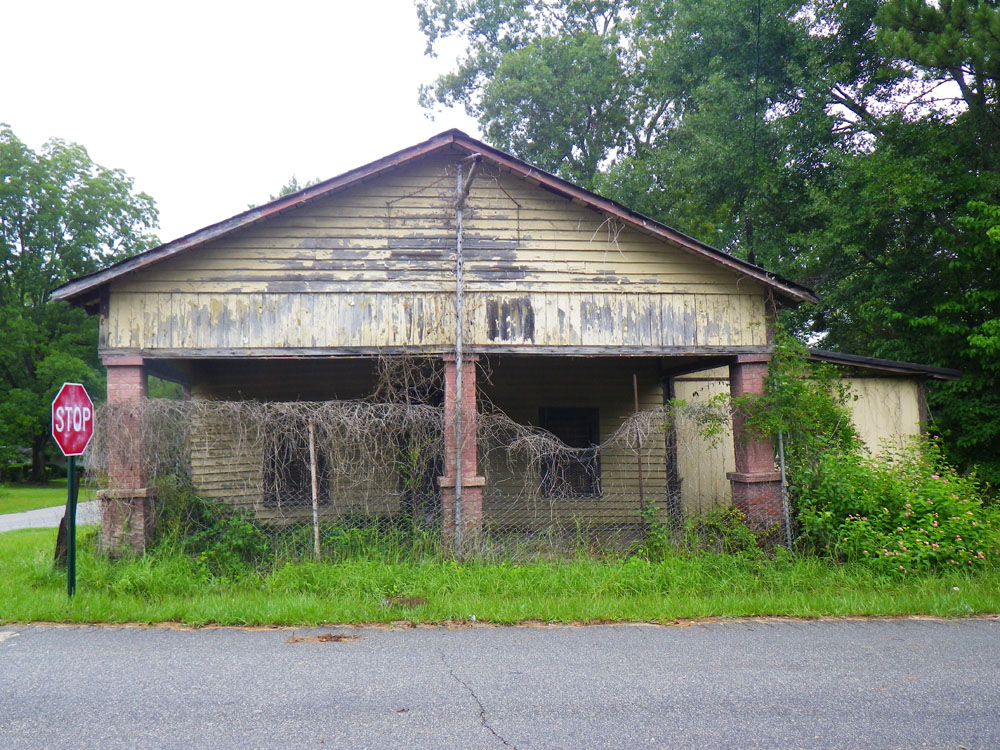 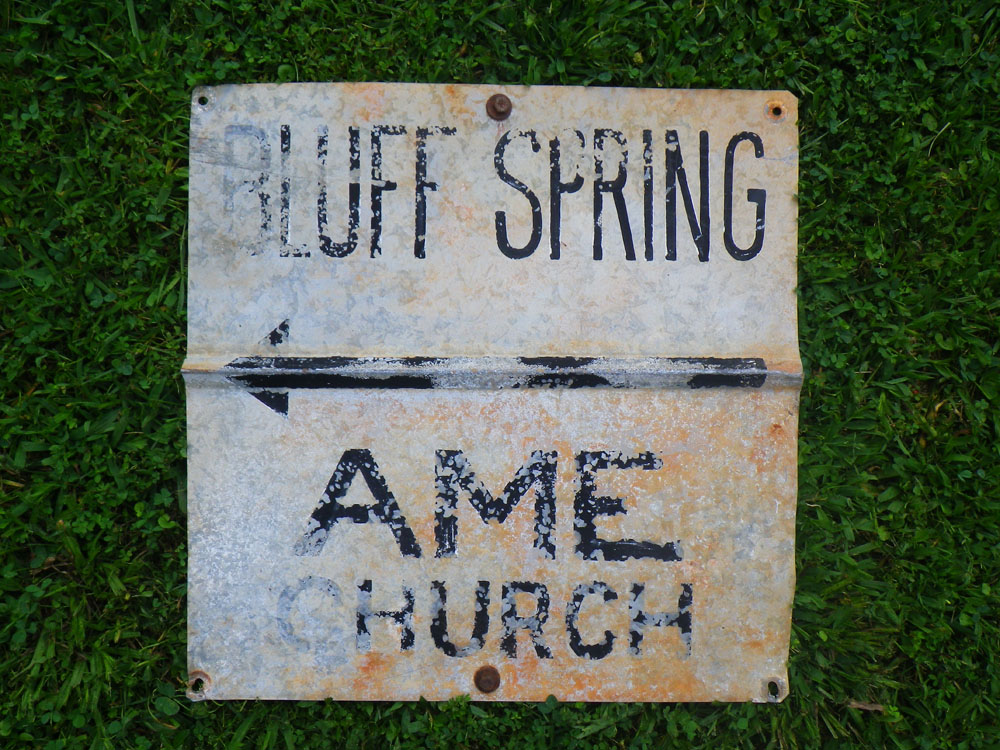